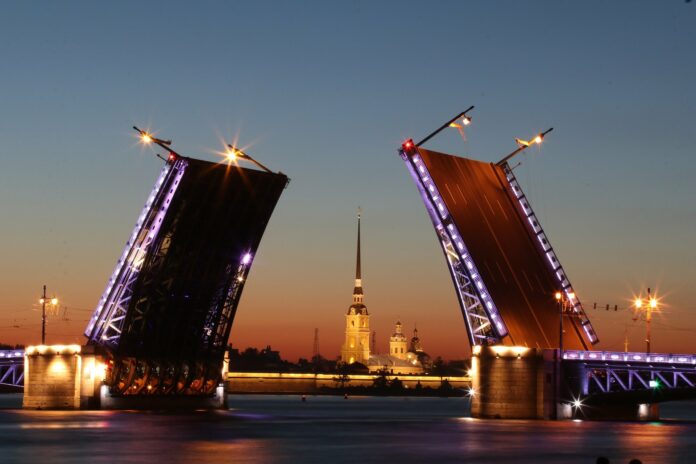 Saint Petersburg – the city of the “White Nights” or also known as the “Venice of the North”, was founded by Peter the Great in 1703. The first structure, the Peter and Paul Fortress, was built on Hare Island, an island in the Neva River.

The city quickly held the key position as a cultural and economic center, attracting architects, artists, dancers, literary figures and musicians from all over the world.

Only the best was good enough for Peter the Great and his successors.

Today, St. Petersburg, with its grandiose palaces, magnificent parks, elegant canals and important squares, is one of the most beautiful cities in Europe. With 5 million inhabitants, St. Petersburg is the largest city in Arctic regions, respectively the northern largest city of millions in the world.

Catherine the Great began her passionate art collection in the magnificent Hermitage in St. Petersburg. Today, the Hermitage is one of the most important art museums in the world.

It comprises over 60,000 exhibits in 350 halls and almost 3 million additional exhibits in the archive. Together with St. Petersburg’s city center, the Hermitage was declared a World Heritage Site by UNESCO in 1990.

The Hermitage building itself already leaves visitors breathless. The huge complex consists of the Small Hermitage, the Old and the New Hermitage, the Hermitage Theater and the magnificent Winter Palace, where the Russian tsars used to reside. All the buildings date back to the 18th and 19th centuries.

The Hermitage in St. Petersburg is home to many of the world’s greatest masters from a wide variety of countries. Leonardo da Vinci, Pablo Picasso, Cezanne, Rembrandt, Rubens, van Gogh, Matisse and Gaugin are just a few of the resounding names whose masterpieces can be admired in the Hermitage.

In addition to the impressive paintings and the magnificent rooms of the palaces, there are also exhibits from prehistoric to modern times.

The collection of the St. Petersburg Hermitage includes almost ten times as many exhibits as the Louvre in Paris.

Tip 2: Church of the savior on spilled blood

The Church of the Savior on Spilled Blood in Saint Petersburg is a jewel and for us one of the most beautiful churches and cathedrals in the world.

It is located in the very center of the city on a side street of Nevsky Prospekt, directly on the Griboyedov Canal.

The Church of the savior on spilled blood was built from 1883 – 1907 on the very spot where the Russian Tsar Alexander II was assassinated on March 13, 1881.

The Church of the savior on spilled blood was not open for long, because after the October Revolution of 1917 all churches in Russia were nationalized, closed or even destroyed.

From the year 1970 the renovation works of the Church of the savior on spilled blood in Saint Petersburg began. In 1997 it was reopened to the public. Since 2004, church services have been held here again.

The Church of the Resurrection is built in the traditional Russian form and consists of 5 main domes, one of which occupies the central square with a height of 81 meters.

A total of 9 domes crown the church, some domes are gilded and others have an enamel coating. All domes are colorfully painted in different colors and textures.

The interior of the Church of the Resurrection will blow you away. It is extremely magnificently designed with huge murals and ceiling paintings that cover the entire interior.

Only about 30 kilometers from St. Petersburg, there is a small town Peterhof. It is famous for the eponymous Peterhof Palace, with the beautiful adjoining grounds. Peterhof is one of the most beautiful sights in Russia.

The complex consists of 3 parts. The upper garden, the great palace (which resembles the French palace of Versailles) and the lower park, with its numerous works of art and fascinating fountains.

Peterhof was originally a residence of the Russian Tsar Peter the Great, the founder of Saint Petersburg.

The history of the residence began in 1710, when Tsar Peter the Great made the drawings of the palace himself. The palace and park ensemble has continued to develop over the centuries.

Since 1990, Peterhof has been a UNESCO World Heritage Site. It is also recognized as one of the seven wonders of Russia. The complex is visited by millions of tourists every year and is a must-see during a trip to Saint Petersburg.

The central place in the Peterhof complex is occupied by the lower park, located between the Peterhof Palace and the Gulf of Finland. It covers 100 hectares, measures 500 meters from north to south and 2.5 kilometers from west to east.

In the central part of the park there are famous fountains like “the Great Cascade”, “Adam and Eve”, or “Samson”. In addition, you can find here the sea channel and the pavilion “Hermitage”.

Peter the Great paid a lot of attention to the sea canal. The ships with the guests could reach the palace directly from the sea through the canal.

The inscription: “Petro Primo Catarina Secunda”, translated “For Peter the First by Catherine the Second” adorns the main entrance of St. Isaac’s Cathedral, a magnificent church in St. Petersburg and one of the finest architectural works by the French architect Henri Louis Auguste Ricard de Montferrand.

It was built in more than 40 years, from 1810 to 1858, and was intended to express Russia’s position as a new great European power.

More than half a million serfs performed the heaviest drudgery. The imposing St. Isaac’s Cathedral was built of 112 solid granite columns, each weighing up to 114 tons. It is the tallest building in the center of St. Petersburg after the Peter and Paul Cathedral.

The gigantic gold dome, also known as “God’s Inkwell”, whose diameter is 26 meters, dominates the silhouette of the city.

The cathedral is one of the largest sacral domes in the world. The observation platform on the colonnade offers a great view of the city. The largest cathedral in the city is capable of holding about 10,000 people. On great occasions, religious services are held.

Today Peter and Paul Fortress is a beautiful complex open to the public with various historical buildings and museums. It belongs to the State Museum of History of St. Petersburg. The most important structure of the fortress is Peter and Paul Cathedral. Here is located the tomb of Tsar Peter the Great.

29 Best Places to Visit in the Czech Republic

30 Most Beautiful Medieval Castles in the World

12 Best Places to Visit in India

© Travel Owl
We use cookies on our website to give you the most relevant experience by remembering your preferences and repeat visits. By clicking “Accept All”, you consent to the use of ALL the cookies. However, you may visit "Cookie Settings" to provide a controlled consent.
Cookie SettingsAccept All
Manage consent

This website uses cookies to improve your experience while you navigate through the website. Out of these, the cookies that are categorized as necessary are stored on your browser as they are essential for the working of basic functionalities of the website. We also use third-party cookies that help us analyze and understand how you use this website. These cookies will be stored in your browser only with your consent. You also have the option to opt-out of these cookies. But opting out of some of these cookies may affect your browsing experience.
Necessary Always Enabled
Necessary cookies are absolutely essential for the website to function properly. These cookies ensure basic functionalities and security features of the website, anonymously.
Functional
Functional cookies help to perform certain functionalities like sharing the content of the website on social media platforms, collect feedbacks, and other third-party features.
Performance
Performance cookies are used to understand and analyze the key performance indexes of the website which helps in delivering a better user experience for the visitors.
Analytics
Analytical cookies are used to understand how visitors interact with the website. These cookies help provide information on metrics the number of visitors, bounce rate, traffic source, etc.
Advertisement
Advertisement cookies are used to provide visitors with relevant ads and marketing campaigns. These cookies track visitors across websites and collect information to provide customized ads.
Others
Other uncategorized cookies are those that are being analyzed and have not been classified into a category as yet.
SAVE & ACCEPT
MORE STORIES