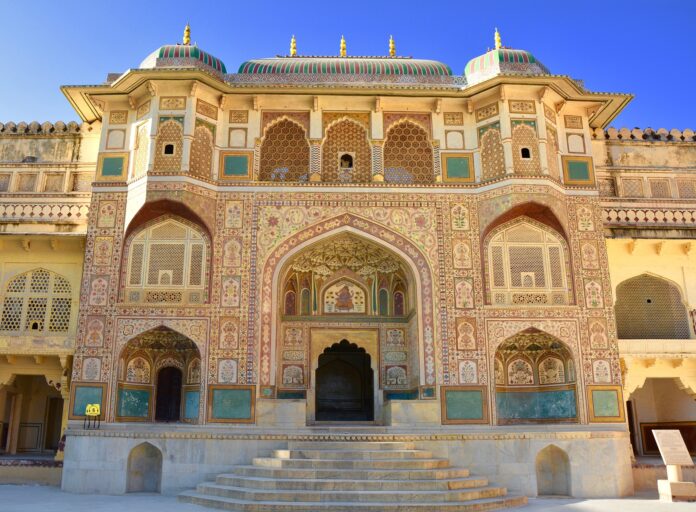 Jaipur was then named the capital of Rajasthan in 1956 and today has about 3 million inhabitants. Moreover, Jaipur is not only known for its special architecture and famous buildings like the gigantic City Palace, but is also considered a successful economic center. Numerous industries have successfully settled in Jaipur and the “Pink City” is also a charming cultural center with many cinemas, theaters and museums. In addition, Jaipur is an important transportation hub in the Indian state and is an indispensable sight during any stay in the north of India due to the worth seeing old town.

About 11 km north of Jaipur lies Amber Fort, an amber-colored palace complex in the hilly landscape of Rajasthan. Amber was once an independent town, but today it is officially part of Jaipur.

The Amber Fort was once the royal palace of the Kachchwaha dynasty before they moved to Jaipur. Majestically perched on the crest of the Aravalli Mountains, the Amber Fort overlooks Lake Maota and the city. The fortress complex is terraced. First you cross the beautifully landscaped gardens on the lake shore. The way up to the palace is a zigzag road either on foot or on the back of the palace’s own elephants. At the top, you finally cross the Sun Gate and find yourself in the first courtyard of the Palace of Amber, which is mostly full of monkeys, people and elephants.

To visit the large-scale palace you can plan a good three hours. Amidst the pavilions, terraces and halls, one passes through beautiful gardens with lush green grass, exotic flowers and fountains. Special highlight of the palace is certainly the Hall of Mirrors. Floral ornaments adorn the walls of the marble hall, the ceiling is covered with small mirrors and colored glass. Through the windows and from the balconies, in good weather, you always have a great view of the city of Amber and the ramparts of the characteristic Aravalli Mountains. The Amber Fort is an absolute must when traveling in Rajasthan!

The international landmark for Jaipur is the worldwide unique facade of the so-called Palace of the Winds. The Maharaja Sawaj Pratap Singh (1778-1803) had the building erected in 1799 as part of the city palace to allow his ladies-in-waiting to observe what was happening on the street without being seen themselves.

The five-story building with the honeycomb-like facade is made of red and pink sandstone with decorations of burnt lime. The facade facing the street contains 953 small, ornate, latticed windows that ensure constant air circulation. The lattice windows (jalis) allowed the women of the court to watch the activity in the street unobserved.

The beauty of this beehive-like facade unfolds especially in the morning hours, when the light of the rising sun falls on the palace. The interior consists of artfully designed chambers and corridors. A true marvel that is almost unforgettable.

The Palace of the Winds is entered from the back. Many visitors are surprised to find that behind the lavishly decorated facade is not the interior of a magnificent palace, but merely a courtyard with a staircase and ramps leading to galleries.

The Palace of the Winds also offers tourists who make the climb to the galleries an excellent view of the City Palace and the hustle and bustle of the streets of Jaipur.

The magnificent city palace is open to the public as the Sawai Man Singh Museum and stands enclosed by high walls among beautiful gardens and proud courtyards in the center of the city. Even today, descendants of the Rajas inhabit part of the palace.

The palace was designed by Jai Singh and built during his reign, but many rooms and halls were added by his successors. The exhibits and interior decoration have lost none of the pomp and splendor of the glorious past.

A richly decorated gateway in the southwest corner of the palace complex leads to the first courtyard, in the center of which stands the solid marble Mubarak Mahal.

The elegant palace was built in 1890 and houses the Textile Museum. Among its treasures are the Maharani’s black Diwali robes, richly interwoven with gold thread and embroidered with elaborate appliqués.

The second courtyard leads to the elevated private audience hall Diwan-I-Kha, built of sandstone and marble. In the hall, which is open to the sides and whose roof is supported by marble columns, are two silver vessels (gangajali) 1.5 meters high.

In the center of the complex is the residence of the princely family, Chandra Mahal, whose seven-story facade is decorated with numerous balconies and windows. The last and largest part of the museum is housed in the former public audience hall Diwan-I-Am, whose high ceilings are supported by richly decorated columns.

The Jal Mahal is such a unique architectural beauty in the city, in the middle of a huge lake called Man Sagar Lake. The name of the structure, Jal Mahal, means the water palace in the local language, as the palace is located in the middle of a lake, a large part of which is submerged. Although sufficient data on the exact date of construction of this palace is not known, it is estimated that the palace was enlarged and renovated by the reign of Amber in Jaipur, Maharaja Jai Singh II in the 18th century, while other reports suggest that it was built in 1799 by the Amber ruler Madho Singh.

The history of Man Sagar Lake, where the palace is located, dates back to 1596 AD. During that time, there was no permanent lake, but only a natural depression that filled with water during the rains. When a famine struck the region in 1596, causing great suffering for the people of the region, the then ruler of Amber directed the construction of a dam in the depression to store water for emergencies. Thus, the Man Sagar Dam, originally built of quartzite and mud and later stabilized with stone in the 17th century, was constructed. From that time on, the dam, lake and palace were renovated several times by the kings of Jaipur before the colonial period and by the Indian government after India’s independence, and still attract thousands of tourists to the site today.

The water palace is not open to visitors. From the riverbank or from a boat you can view the magnificent exterior facade.

The Nahargarh Fort is located on the edge of the Aravalli Hills, overlooking the pink city of Jaipur, in the Indian state of Rajasthan. The view of the city from the fort is impressive.

The Nahargarh Fort is connected to the Amber Fort and the Jaigarh Fort. Originally, the fort was called Sudarshangarh. Later, nevertheless, it became known as Nahargarh, the “abode of the tigers”.

In 1734, Maharaja Sawai Jai Singh II, the founder of Jaipur, built the fort as a place of retreat on the top of the ridge above the city. The walls on the surrounding hills were extended and formed the fortifications, which thus connected the fort to Jaigarh Fort and opened up to Amber Fort.

The fort was expanded in 1868 during the reign of Sawai Ram Singh. In 1883 to 1892, a series of palaces were built in Nahargarh by Sawai Madho Singh. Nahargarh was also the hunting seat of the Maharajas.

The fort follows an Indo-European architecture and reproduces many structures inside the fort. To the left of the entrance gate ‘Tadigate’, there is a deity temple dedicated to the ruler of Jaipur. Apart from this, there is another temple inside the fort dedicated to the Rathore Prince of Nahar Singh Bhomia. Another place of interest in the fort is “Madhavendra Bhawan” by Sawai Madho Sing. This is a two-story building with 12 suites for the king and his queen.

18 Best Cities to Visit in Australia

12 Best Places to Visit in India

© Travel Owl
We use cookies on our website to give you the most relevant experience by remembering your preferences and repeat visits. By clicking “Accept All”, you consent to the use of ALL the cookies. However, you may visit "Cookie Settings" to provide a controlled consent.
Cookie SettingsAccept All
Manage consent

This website uses cookies to improve your experience while you navigate through the website. Out of these, the cookies that are categorized as necessary are stored on your browser as they are essential for the working of basic functionalities of the website. We also use third-party cookies that help us analyze and understand how you use this website. These cookies will be stored in your browser only with your consent. You also have the option to opt-out of these cookies. But opting out of some of these cookies may affect your browsing experience.
Necessary Always Enabled
Necessary cookies are absolutely essential for the website to function properly. These cookies ensure basic functionalities and security features of the website, anonymously.
Functional
Functional cookies help to perform certain functionalities like sharing the content of the website on social media platforms, collect feedbacks, and other third-party features.
Performance
Performance cookies are used to understand and analyze the key performance indexes of the website which helps in delivering a better user experience for the visitors.
Analytics
Analytical cookies are used to understand how visitors interact with the website. These cookies help provide information on metrics the number of visitors, bounce rate, traffic source, etc.
Advertisement
Advertisement cookies are used to provide visitors with relevant ads and marketing campaigns. These cookies track visitors across websites and collect information to provide customized ads.
Others
Other uncategorized cookies are those that are being analyzed and have not been classified into a category as yet.
SAVE & ACCEPT
MORE STORIES